Posted at 23:44h in published by Benjamin Prudhomme 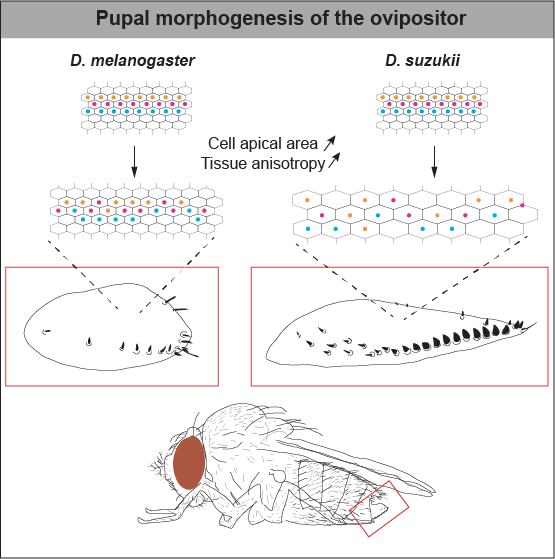 Morphological diversity is dominated by variation in body proportion, which can be described with scaling relationships and mathematical equations, following the pioneering work of D’Arcy Thompson and Julian Huxley. Yet, the cellular processes underlying divergence in size and shape of morphological traits between species remain largely unknown. Here, we compare the ovipositors of two related species, Drosophila melanogaster and D. suzukii. D. suzukii has switched its egg-laying niche from rotting to ripe fruit. Along with this shift, the D. suzukii ovipositor has undergone a significant change in size and shape. Using an allometric approach, we find that, while adult ovipositor width has hardly changed between the species, D. suzukii ovipositor length is almost double that of D. melanogaster. We show that this difference mostly arises in a 6-h time window during pupal development. We observe that the developing ovipositors of the two species comprise an almost identical number of cells, with a similar profile of cell shapes and orientations. After cell division stops, we find that the ovipositor area continues to grow in both species through the isotropic expansion of cell apical area and the anisotropic cellular reorganization of the tissue. Remarkably, we find that the lengthening of the D. suzukii ovipositor compared to that of D. melanogaster results from the combination of the accelerated expansion of apical cell size and the enhanced anisotropic rearrangement of cells in the tissue. Therefore, the quantitative fine-tuning of morphogenetic processes can drive evolutionary changes in organ size and shape.